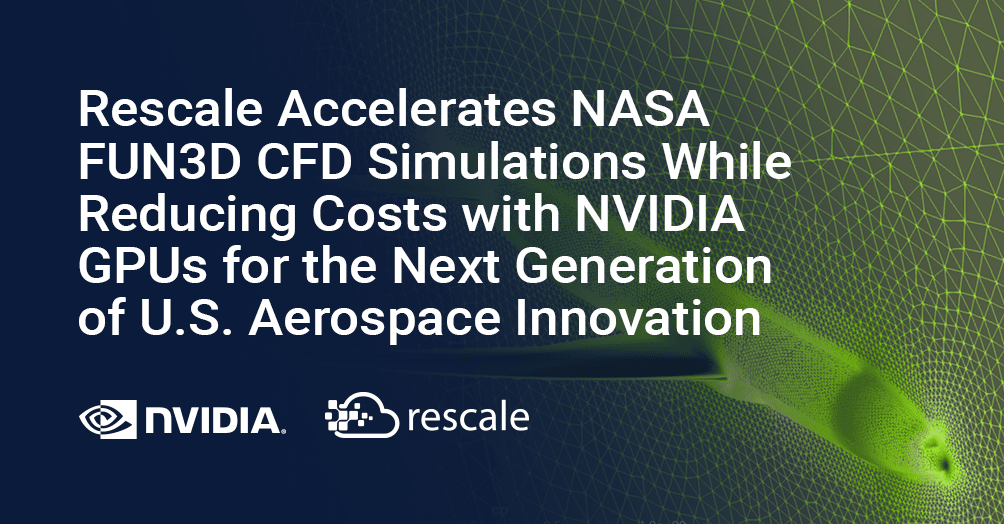 FUN3D is a NASA-developed suite of advanced Computational Fluid Dynamics (CFD) tools that is used to model fluid flow in engineering and the testing of various vehicle, projectile, and component designs. The NASA Technology Transfer Program, with its mission to ensure that innovations developed for exploration and discovery are made broadly available to the American public and provide maximum benefit to U.S. aerospace innovation, makes FUN3D and other applications available to the public. FUN3D is available to authorized U.S. commercial users, authorized individual U.S. users including citizens and lawful permanent residents, qualified organizations, and other government agencies. Rescale, a high performance computing (HPC) platform built for the cloud, is proud to collaborate with NASA on a process that allows authorized users to run FUN3D securely on Rescale’s ITAR-compliant platform, which also recently was awarded FedRAMP authorization.

“We’ve seen the biggest increase in U.S. commercial aerospace investment in decades,” said Matt McKee, Chief Operating Officer at Rescale. “We’re incredibly excited that NASA is strongly committed to promoting U.S. leadership in commercial aerospace innovation through access to their software tools. Our customers can design even faster with FUN3D now that NASA has created the approval paths for users who rely on the cloud.”

Increasing private investment in aerospace associated with Space 4.0 and emerging commercial and government investment in urban mobility have accelerated the demand for aerospace R&D. A rapidly growing community of public and private sector scientists, researchers, and engineers depend on cutting-edge computational engineering tools like FUN3D to design and simulate new digital prototypes. For power users, FUN3D offers the flexibility of control over a lot of parameters that are often hidden in other CFD solvers, which helps make it a particularly well-suited application to solve highly complex, large-scale CFD simulation problems where high accuracy is extremely important. For example, the software has been widely used for simulations like launch vehicles, rotorcraft, space transportation vehicles, the design of wind tunnel and flight experiments, exploration of high-lift, cruise performance, military technology, and large-scale computer science research and algorithmic studies.

FUN3D is a powerful CFD simulation suite. As with any software application, there are necessary design trade-offs that must be made to meet the application’s objectives. In the case of FUN3D, it is a memory-bound application, which means its performance is constrained primarily by the limited rate at which data can be moved from main memory to processing units. With CPU-only processing, one way to compensate for this limitation is to increase the size of the hardware cluster used to run the application for large simulations. For example, large CPU core counts in the thousands across many nodes are often used to reduce the simulation run time into commercially viable timeframes.

The FUN3D team has continued to innovate on FUN3D’s computational performance. Approximately 10 years ago, the team began investigating the use of NVIDIA GPUs to efficiently accelerate computational speed. In collaboration with NVIDIA, a major breakthrough was achieved in 2017 when the team adopted the NVIDIA CUDA programming model to leverage then newly introduced NVIDIA Tesla V100 GPUs. Since then, the team has continued to advance the GPU capabilities of FUN3D as NVIDIA introduced newer and more advanced GPU architectures.

Rescale’s HPC engineering team includes technical experts with many years of combined experience in optimizing the CPU and GPU performance of FUN3D in the cloud for NASA-authorized users who rely on the Rescale platform for turnkey cloud deployments. Recently, Rescale benchmarked FUN3D on NVIDIA GPU-accelerated cloud infrastructure as part of Rescale’s efforts with NVIDIA to showcase the value of GPUs in the cloud for HPC applications. The FUN3D benchmark assessed how the cost-performance of FUN3D on GPU-accelerated infrastructure compared to popular CPU-only infrastructure options offered in NASA-approved cloud service provider (CSP) data centers from Amazon Web Services (AWS) and Microsoft Azure.

“GPU-accelerated CAE applications are growing rapidly and are having a profound effect on the speed of design innovation,” said John Josephakis, Global VP of Sales and Business Development for HPC/Supercomputing at NVIDIA. “We collaborate closely with Rescale because of their deep in-house expertise with turnkey deployments of CFD simulation software like FUN3D in the cloud, and also their focus on simple procedures for customers to apply the latest NVIDIA GPU hardware options in the cloud.”

Rescale’s customers are now beginning to see the potential of FUN3D with NVIDIA GPUs. For example, XTI Aircraft, a developer of light commercial aircraft for point-to-point travel that is being designed to fly at 2x the speed and 3x the range of a helicopter with 75% lower CO2 emissions and 60% lower operating costs, has increased its utilization of GPUs for FUN3D simulations in its development of the TriFan 600 VTOL aircraft.

“We are fundamentally changing short-haul, point-to-point air travel, and we need the software and hardware that will minimize the time to iterate on our aircraft designs,” said Scott Wertel, PE, Configuration Manager – Tools & Processes at XTI Aircraft. “With Rescale, we were able to easily try FUN3D across a wide spectrum of cloud hardware options in just a few clicks without an extensive IT support department, getting the best value for our CFD needs. GPUs will increase that value and continue the rapid development of the TriFan 600.”

FUN3D version 13.7 was used for our benchmarking analysis in all iterations.

Rescale coretypes are special configurations of our partner CSP instance families that Rescale has optimized specifically for HPC and AI workloads. Rescale benchmarked FUN3D on one GPU-accelerated coretype, which is based on the latest GPU available within a NASA-approved CSP datacenter, and two CPU-only coretypes that are popular for CFD simulations on Rescale.

We are extremely excited by the results of running FUN3D on the Aquamarine v3 GPU-enabled coretype compared to two of the most popular CPU-only coretypes, Catseye and Jasper, for CFD on Rescale. Often, Rescale customers have to make trade-offs between cost and performance when selecting hardware for simulations. In the case of our FUN3D benchmarking analysis, the simulation run with the selected GPU-based coretype was both faster and cheaper than the comparison CPU-only coretypes. Specifically, the simulation on Aquamarine v3 (1 node) ran 2x faster than on Catseye (10 nodes) or Jasper (6 nodes). Total simulation costs on Aquamarine v3 (1 node) were reduced by 80% compared to Catseye (10 nodes), and were reduced by 70% compared to Jasper (6 nodes).

More details regarding the simulation time and costs from Rescale’s benchmarking analysis are shown below.

Based on both the performance and cost advantages demonstrated from our benchmarking analysis, we strongly recommend that customers consider cloud-based NVIDIA GPU-based infrastructure for all supported FUN3D simulations. Rescale also will continue to assess the cost-performance evolution of GPU infrastructure for FUN3D as newer NVIDIA GPUs such as the NVIDIA A100 and NVIDIA H100 become available to Rescale through NASA-approved CSP datacenters, and as NASA expands GPU support for new analysis capabilities within the FUN3D suite.

The best part of Rescale is that FUN3D is instantly deployable via Rescale’s intelligent control plane for NASA-authorized users on the most optimized and cost-performant NASA-approved public cloud hardware that’s available today. Engineers who are authorized by NASA to use FUN3D have the power to drive incredible innovation at unprecedented cost-efficiency by leveraging Rescale’s turnkey stack of free-to-use FUN3D software optimized on convenient pay-per-use NVIDIA GPU-based hardware in the cloud. In addition to FUN3D, Rescale offers a catalog of 1000+ and growing HPC and AI applications that can be launched in the cloud with the same turnkey instant deployment convenience.

FUN3D is software that is restricted to U.S. citizens or U.S. persons (as defined by 22 CFR §120.15) only. So, the first step is to visit the NASA Software Catalog and request a FUN3D Software Usage Agreement. In that request, please also indicate that you would like to run FUN3D on Rescale. The Software Release Authority will ensure that your Software Usage Agreement includes the appropriate approval terms to use FUN3D on Rescale.

(2) Contact Rescale to Get Onboarded and Begin Using FUN3D

Once you have executed NASA’s Software Usage Agreement and have a copy of the FUN3D software from NASA, then please contact Rescale to have one of our experts guide you through the quick and easy onboarding process to begin running FUN3D on NVIDIA GPUs with no IT expertise required. Contact us here or email partners@rescale.com to get started for free with up to 5 days of NVIDIA GPU access provided by Rescale. It’s that easy!

Advances in technology in the past decade have decreased the cost of sequencing the human genome significantly. With lower costs, researchers are able to perform…

Companies are moving to high-performance computing (HPC) in the cloud for access to flexible, varied, pay-per-use HPC resources.  At the same time, they don’t have…

Overview and Key Comments EDRMedeso is a Premier Reseller Partner of Rescale and an Elite Channel Partner of ANSYS In this webinar, we dive into…

The way we conduct research and make new discoveries in nearly every discipline relies more and more on computers. As machine learning, data science, new…

Enterprises are embracing the instant scalability and performance of cloud-based simulations to accelerate the time-to-value of new product innovations. However, technology leaders in these enterprises…

Total Cost of Ownership (TCO) is a powerful financial tool that allows you to understand the direct and indirect expenses related to an asset, such…