“You Promised Me Mars Colonies, and Instead, I Got Facebook” said Buzz Aldrin in a MIT Technology Review article in 2012.  PayPal co-founder Peter Thiel, added “We wanted flying cars — instead we got 140 characters.” In the article, titled “Why We Can’t Solve Big Problems,” Editor-in-chief Jason Pontin adds that critics of Silicon Valley feel “venture investing has shifted away from funding transformational companies” toward funding ”features, widgets, irrelevances.”
The reasons Pontin feels we haven’t seen “big things” since the PC revolution fall into three categories.  First, many of society’s big problems are not bound by technology, but people, policy, and ideology. Second, many of the remaining big problems are too complex and nobody understands them – in other words, limited scientific knowledge.  Lastly, economic forces – solving “big things” is expensive, and new innovations are often not cost competitive to make societal impact. Tesla’s success in the automotive market is an exception.
But there is good evidence that the constraints of technological progress are about to change.  To see why, we need to understand that technology innovations are dependent solving two types of computational problems. In the last twenty years, trends in computing favored one type over the other.  The next twenty years however, will bring us closer to a balance. This won’t bring us Mars colonies right away (sorry Buzz). But for those seeking supersonic travel, precision medicine, and a clean-energy world, there’s a reason to be optimistic.

Today’s world does not look like the future many of us saw as children in movies and popular science, because there’s been asymmetrical progress between two types of innovation. Both are shaped by developments in computing and software, albeit at different paces. We can classify these innovations connectivity-driven and applied science. Fifty years ago, futurists anticipated much of the latter, and less off the former – no one’s said predicting the future was easy. 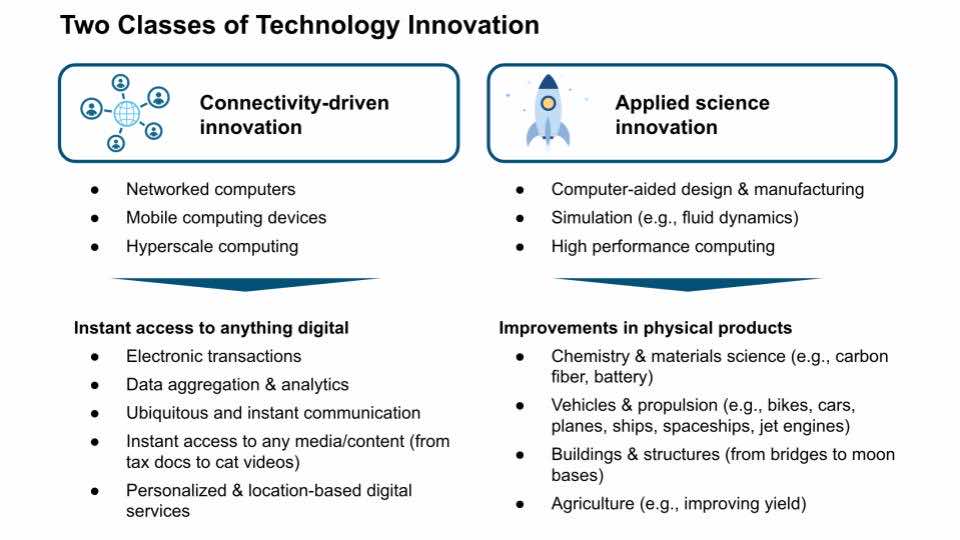 Modern connectivity-driven innovations started with computer networking.  By the early 90’s it was possible for new entrepreneurs to sell things like books on the internet. By 2010, mobile computing devices, along with cloud and hyperscale infrastructures (lots of cheap servers with complex software tying it all together), made it possible to create seamless digital interactions that were personalized, and in context.
Popular examples of recent connectivity-driven innovations include AirBnB and Uber, which have changed how we vacation and travel. Valuable to be sure, but they are not applied science innovations. At their core, AirBnb and Uber are just-in-time & personalized brokers of something we’ve been doing for decades – renting houses and riding taxis. Same is true for social media like Facebook and Twitter. Their main product is targeted advertisements, which are certainly more precise than age-old billboards. 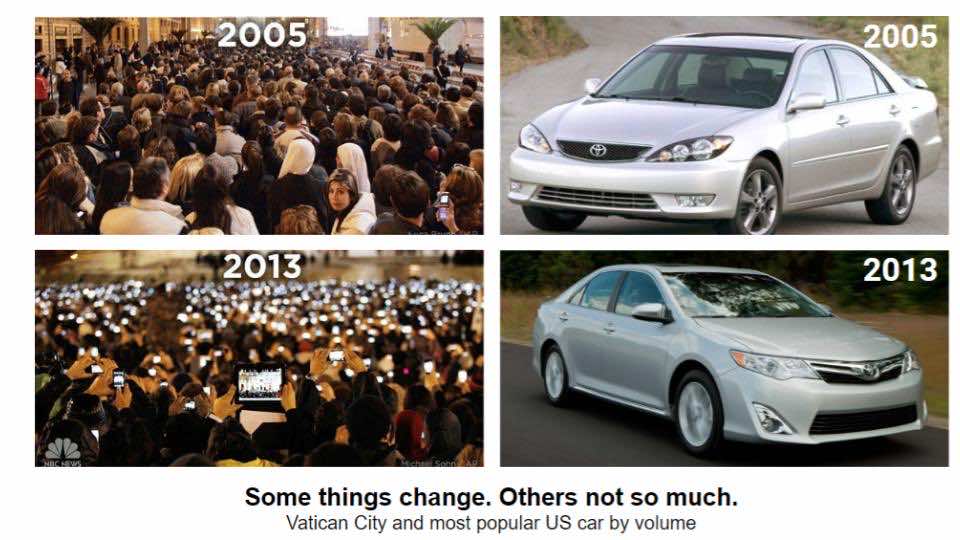 What happened on the applied science innovation front during this time?  On the surface, not nearly as much. While we’ve seen improvements on the quality and efficiency of physical products, it hasn’t changed how we live. No one has flown supersonic commercially for nearly twenty years. Electric cars and clean energy are barely starting to make a dent. No flying cars exist beyond early prototypes. It’s understandable why many are disappointed.

There are several reasons why connectivity-driven innovations have seen the spotlight while applied science innovations have been comparatively starved.  Connectivity-driven innovation has several advantages. First is its faster innovation and monetization cycle. It’s much faster to build a mobile app and try to monetize than to advance scientific breakthroughs, push through regulatory hurdles, manufacture, and develop a product GTM. Because of this advantage, it sees more investment from VC’s (who often want returns in 10 years). This gets us to the second advantage, which is much greater press and media coverage, and greater intake of talent.
The third advantage is that computing requirements for connectivity-driven innovations are readily available utilities in the public cloud, where the 65% of workloads run. Just add software. On the other hand, applied science innovations not only require physical manufacturing, but solving problems in the outdated-ly named high performance computing (HPC) discipline.  HPC hasn’t changed much in decades; its common operating model is closer to hugging servers than utility computing. Engineers are resigned to “dumb down their model” to complete their designs with limited computing power, or wait for compute time to run simulations. Project costs explode, time to market is delayed, while IT organizations take pride in the high utilization of expensive HPC hardware they bought three years ago. For anyone that’s spent time in enterprise cloud computing, it can seem downright crazy.

But this is about to change – HPC workloads are shifting to the cloud.  This means for the computing part of the equation, applied science innovations will soon be on equal footing as its connectivity-driven cousins.  Cloud providers are making the specialized HPC infrastructures available on demand. Simulation software vendors are shifting their licensing models for utility consumption.  New platforms are helping to bring it all together as turnkey solutions, making the cloud tolerable for HPC veterans who have spent decades managing hardware.
Today, large enterprises with household names like Nissan and Trek Bicycle are already doing  HPC in the cloud to advance applied science innovations. In recent years we’ve also seen a rapid expansion of VC-funded startups in the electric car, aerospace and space industries. For these startups, a cloud-based approach to running simulations is the default starting point. The agility of cloud computing coming to applied science innovations won’t address the constraints of political policy and ideology to help society solve it’s biggest problems.  But for those who’ve had their fill of social/mobile/local webapps and want to see an improved pace of applied science innovations, there is reason to be optimistic.

Rescale now supports running a number of neural network software packages including the Theano-based Keras. Keras is a Python package that enables a user to…

The Top 20 Memes Only Engineers Understand We are in the business of helping engineers. Whether they are working on new developments in supersonic flight…